Start a Wiki
watch 01:24
The Loop (TV)
Do you like this video?
The Fluffy Bunch is a group of three small, cute, innocent looking but evil little animals who use their cuteness to commit crimes and get away with them. They appear in the episode Sweet 'N Sour. The Fluffy Bunch are voiced by the same voice actresses who voiced The Powerpuff Girls.

She's the leader of the group, and one of the group's two female members. Her kitty cat looks are quite cute, but her personality is anything but. She is somewhat mean-spirited and spoiled. She is voiced by Cathy Cavadini, who also voiced Blossom.

She's the other female member of the Fluffy Bunch. Her body is pink and her eyes are blue. Like the other members, she is spoiled and greedy. She has an intelligent side and can trick people easily. Cuddly is much nicer than the other members, but her spoiled behavior and greediness interfere with that. She usually bounces around. She is voiced by E.G. Daily, who also voiced Buttercup.

The only male member of the Fluffy Bunch. Like the others, he is spoiled, mean, and likes rare things. He has a big love for dog treats. Puppy Wuppy is stronger compared to the others, but he can be ditzy most of the time and usually gets hit by Fluffy Kitty for that, similar to how Brick hits Boomer. He is voiced by Tara Strong, who also voiced Bubbles. 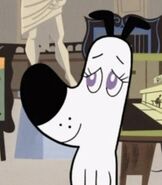 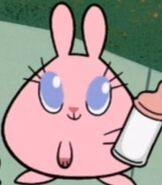 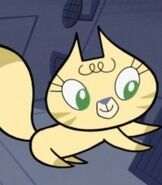 Add a photo to this gallery
Retrieved from "https://powerpuffgirls.fandom.com/wiki/The_Fluffy_Bunch?oldid=179636"
Community content is available under CC-BY-SA unless otherwise noted.