Powerpuff Girls Wiki
Register
Don't have an account?
Sign In
Advertisement
in: Episodes, Crossover, The Powerpuff Girls,
and 8 more

In Townsville, Mojo Jojo is plotting to use cybernetically enhanced battle monkeys to attack the city. The Powerpuff Girls, Blossom, Bubbles, and Buttercup, break into his lab with Buttercup unplugging the monkeys, trying to stop Mojo, thwarting Mojo Jojo's plan. Mojo Jojo sprays the Powerpuff Girls with a repellent designed for them and reveals he will carry out his plan in a dimension where superheroes don't care about stopping villains. The narrator wonders what type of awful place Mojo Jojo is heading to and the villain arrives in Titans Tower at Jump City, captivating Cyborg and Beast Boy as they dub him a magic monkey. Mojo Jojo deduces that they are superheroes, but Beast Boy is shocked that he talks and Cyborg compliments his hat. The villain wonders if they'll still like him when he creates his cybernetically enhanced battle monkeys. Cyborg and Beast Boy become fascinated by the idea of a monkey army and ask to help him which Mojo Jojo agrees to.

As the trio exit the tower and Robin enters the living room, the narrator recaps the ensnarement of Beast Boy and Cyborg into Mojo Jojo's plan. Robin, able to hear the voice, asks for its identity and the narrator is shocked that he is able to hear him. Raven and Starfire approach him, asking if he is hearing voices in his head again when the Powerpuff Girls arrive. The narrator is relieved by their arrival and when Starfire asks for their identity, Robin answers that they're the Powerpuff Girls. Blossom asks how he knew their identity and Robin says it was because of the voice. Blossom explains they've traveled from another dimension looking for Mojo Jojo, but the Titans insult them by calling them babies. Blossom whispers “What’s wrong with these guys?” Buttercup introduces herself and her sisters to the Titans while Raven introduces herself and the Titans with fake names. Robin tells her not to joke like that as their underdeveloped baby brains can't process it and introduces himself, Raven and Starfire before noting the absence of Beast Boy and Cyborg.

At the Haunted Tanks Army Surplus Store, Beast Boy, Cyborg and Mojo Jojo finish raiding it for supplies while dancing to a song. Cyborg asks if they should have told the other Titans where they were, but Beast Boy reassures him by revealing that he left a note. Raven finds the note on the TV, but it only says "Help! Monkey!" which Starfire interprets as them in danger. Blossom grows frustrated and says that they've been trying to tell them, and Robin believes they need their help as the Powerpuff Girls are only babies, frustrating them further. Bubbles shouts that they're superheroes, but Raven mockingly says she can be anything she wants when she grows up. When Blossom claims that the Titans aren't good at their jobs, Raven believes she is challenging them. Starfire says the Powerpuff Girls want to determine which superhero team is superior but Blossom says that it's not a competition. Robin announces that the Powerpuff Girls will face off against the Teen Titans, annoying the Powerpuff Girls. The narrator begins to recap when Robin interrupts, asking if he can narrate his actions, including jumping out of the tower.

At the Zoo, Mojo Jojo performs "Monkey Army" while Beast Boy and Cyborg gather his army of cybernetically enhanced battle monkeys and build a lair. Mojo Jojo becomes tired and Beast Boy and Cyborg agree to finish his monkey army for him. That night, Robin tells Raven, Starfire and the Powerpuff Girls that the only lead they have is the note and asks which of them will compete against him. Blossom volunteers, but clarifies that it's not a competition though Robin says she is going down. At the lab, Robin finds a hair on the note and begins a complex process to determine who it belongs to, but Blossom finds a postscript on the note, informing that they're at the zoo. The next day, the six heroes travel to the zoo where two gorillas are guarding the entrance. Bubbles and Starfire begin fighting on who can defeat them with kindness, but Starfire grows frustrated and Bubbles uses her to defeat the gorillas. They come across droids and Buttercup tells Raven she'll handle the defenses, proceeding to defeat them. Starfire asks Raven if she's going to participate, but Raven tells her that she remembered she didn't care. Buttercup announces that they won their competition, but Robin, who can't admit he was outdone, says it wasn't one. Starfire agrees and calls them immature though Raven reminds them that they're babies.

At Mojo Jojo's lair, Mojo Jojo prepares to unveil his army of cybernetically enhanced battle monkeys, but they start partying instead. He becomes annoyed when Beast Boy and Cyborg announce that they're an army of party monkeys. The villains catches the six heroes approaching his lair and decides to set a trap for the Powerpuff Girls, confining Beast Boy and Cyborg to use as bait and then spraying them with his entire supply of Powerpuff Girl repellent. The narrator expresses concern as the heroes are heading straight for the trap and Robin stops in his tracks, informing the others but assuring he has a plan. Three figures break into Mojo Jojo's lair and approach Beast Boy and Cyborg, only for Mojo Jojo to spray them with the repellent. He celebrates his victory, but the figures reveal themselves to be Robin, Raven and Starfire in disguise. The Powerpuff Girls appear behind Mojo Jojo and defeat him. Robin tells the Powerpuff Girls that they look like harmless, adorable babies but are superheroes as they're smart, strong, and have pure hearts. Blossom says they couldn't have stopped Mojo Jojo without them and the Titans celebrate as they admitted they're better. Buttercup remarks that Jump City is the worst while Cyborg and Beast Boy forgive Mojo Jojo as it's cute when he talks. The narrator ends the episode by saying the day was saved no thanks to the Teen Titans adding “Seriously, what is wrong with those guys?” 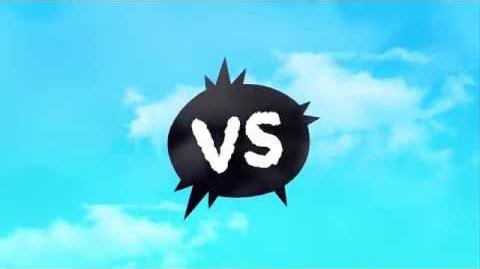 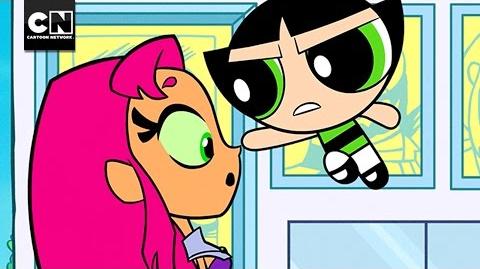 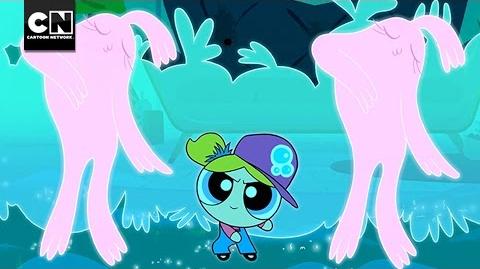 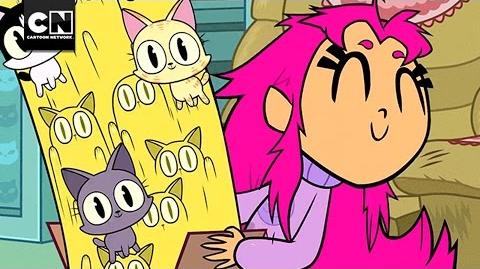 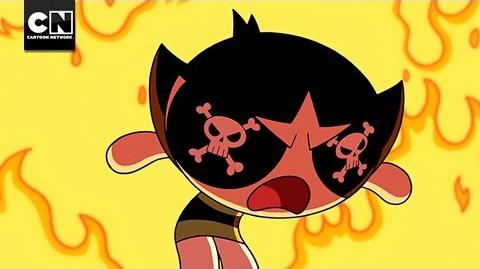 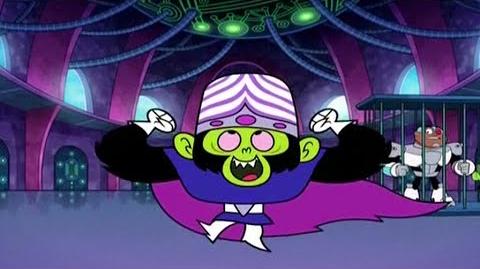 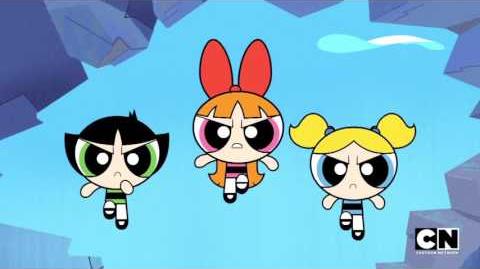 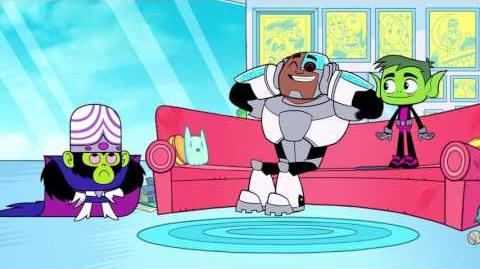 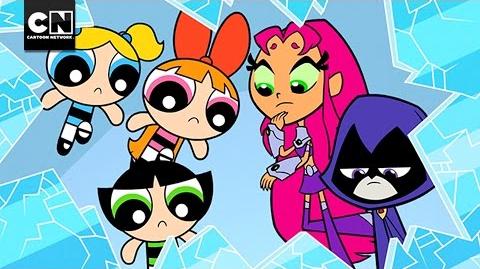 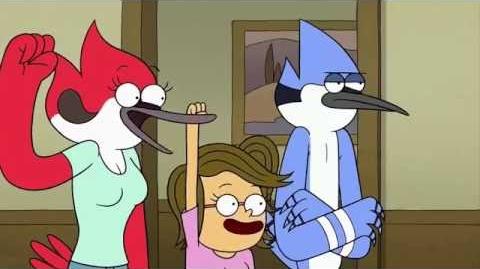 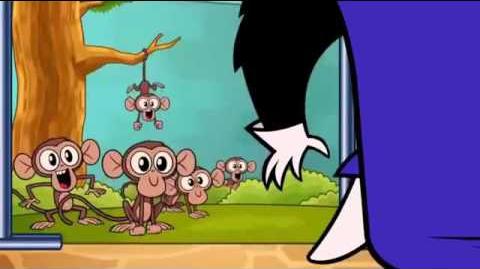 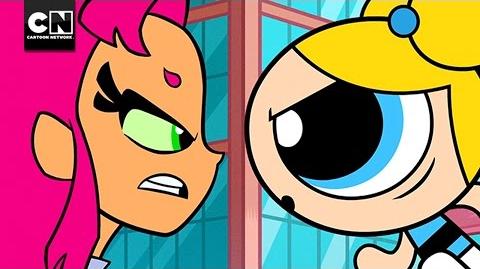 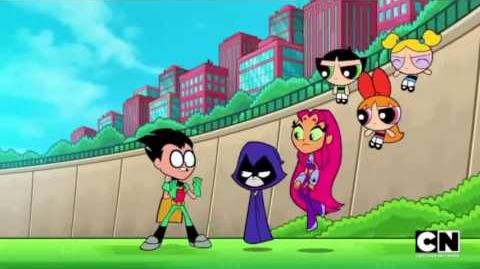 Teen Titans Go! Vs The Powerpuff Girls (Clip) Working Together