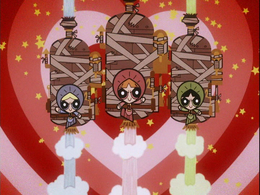 The Steamypuff Girls are the Old Western versions of of the The Powerpuff Girls. They appeared in the episode "West in Pieces".

In "West in Pieces", The Steamypuff Girls were first created by the ancestor of Professor Utonium to protect the city of Townsville from Mojo the Kid, who had just robbed the first bank ever and kicked the Sheriff, The Mayor of Townsville's ancestor, out of town. Like their descendants, their names are Blossom, Bubbles, and Buttercup. The Steamypuff Girls are made of sassafras, arsenic, and everything old-fashioned, with coal as the accidental extra ingredient and they use coal-powered steam engines strapped to them to fight crime. Sometimes a steam engine runs out of fuel, sputtering and puffing out the left over clouds before falling to the ground. They seem to possess no actual superpowers, being reliant on their steam engines.

They wear bonnets and long dresses of their trademark colors; pale red, green, and blue, and giant brown jetpacks. They are slightly paler than the Powerpuff Girls.

Retrieved from "https://powerpuffgirls.fandom.com/wiki/Steamypuff_Girls?oldid=208296"
Community content is available under CC-BY-SA unless otherwise noted.