Start a Wiki
watch 01:21
The Loop (TV)
Do you like this video?
Sakurako Kintoki (Annie in the English dub) is a character in the Powerpuff Girls Z anime series. Under normal circumstances, she is a shy young girl who runs a sweets store and has a crush on a boy named Jason. But whenever she wears lipstick, she transforms into the mischievous and seductive Sedusa, who serves as a primary enemy of the Powerpuff Girls Z.

The Powerpuff Girls investigate Sedusa's crimes and find out where she will strike next. Heading for a store, Bubbles goes inside the mall as Blossom and Buttercup are on a lookout. Suddenly, they find Bubbles tied up and they go look for Sedusa. However; it is quickly revealed to be Sedusa in the form of Bubbles. She then tries to trick Bubbles out of the store (disguised as Buttercup) but fails as Bubbles figures it couldn't be Buttercup as she dislikes perfume (or in that fact, dislikes girly stuff). Shortly, Blossom and Buttercup find Bubbles and confront her, who reveals herself. Sedusa tries to make a getaway but is soon knocked out by Buttercup's daruma otoshi hammer. 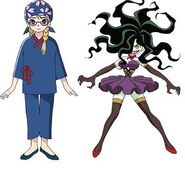 Add a photo to this gallery
Retrieved from "https://powerpuffgirls.fandom.com/wiki/Sakurako_Kintoki?oldid=198801"
Community content is available under CC-BY-SA unless otherwise noted.