Rainbow the Clown is a clown who entertains children at parties. After a truck with bleach hits him, he turns black and white and gets superpowers. Rainbow's evil alter ego, Mr. Mime, has the power to erase colors by touch and even render objects and animals, people, and music mute. For instance at first, he touches the bleach trucker and secondly the little boy who holds a balloon. He turned back into a very grateful Rainbow after the girls perform a song that restores Townsville's colors. He thanks the girls for bringing him back to life, but they beat him up and send him to prison anyway.

Rainbow, or another similar clown, later reappeared in Birthday Bash.

Rainbow was voiced by Tom Kenny. 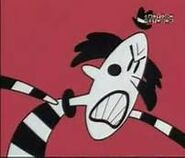 After the bleach effect

Silencing the boombox by blocking the quartet of hip-hop dancers