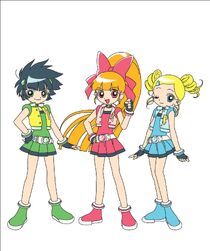 From April 1st to December 30, 2007, the program airs on Cartoon Network in Japan. An English-dubbed version produced by Ocean Group aired by Cartoon Network Philippines on their Boomerang channel in September 2008, though has not yet been released in North America, and at this point, most likely never will, except for Mexico (and Latin America as well) where it airs on Cartoon Network. A manga of the same name ran in Shueisha's Ribon magazine between July 2006 and June 2007.

The plot of the anime differs much from the original series. Professor Utonium was experimenting while his son Ken Kitazawa/Utonium created Chemical Z (a variant of his father's Chemical X) when a local restaurant specialty fell into the Chemical X. Ken uses the chemical to destroy an ice glacier and avoid an ecological disaster. The impact causes white and black Z-Rays to fly across the skies of New Townsville. The white lights hit Blossom, Bubbles, and Buttercup transforming them into the Powerpuff Girls. Those hit with the black light became the series' villains. After defeating Mojo Jojo, Mr. Mayor assigned them to be the heroines of the city. They are called to action using the cry of Ken Kitazawa's robot pet puppy, Poochi.

The pilot of Powerpuff Girls Z is missing. For more information, click here.

Differences from the original American version

(Note: Most characters in the anime are based on their American counterparts. Characters mentioned in this section are those that are either significantly different or not in the American version at all. For those present in both versions, there is also a brief PPGZ section on their main pages.)

Other Protagonists Present in Both Adaptations

Powerpuff Girls Z received mixed to positive reviews from critics and audiences. It is different from the original series and heavily polarized the audiences (not to mention fans of the original show), as it's either the subject of praise or criticism. On TV.com, it gained a 7.4/10 rating based on 145 votes. On MyAnimeList.net, it gave it a low rating of 6.5/10 from 4,536 users. On the other hand, CartoonCrazy gave it a high rating of 4.3/5 based on 289 reviews.

The Powerpuff Girls Z: Original Soundtrack was released on June 27, 2007.

The CD contains TV-sized versions of the show's opening and ending themes (although the song, Jig THE Upper, is the version that was featured on the single released by Hoi Festa and not the one used in the actual show,) a party mix of the show's music produced by TAICHI MASTER, and character songs sung by Emiri Katou, Nami Miyahara and Machiko Kawana. The supplied booklet also contains pre-production artwork, including a variety of concept designs for the Powerpuff Girls Z and other series characters.

The video game entitled Game de Demashita! Powerpuff Girls Z for the Nintendo DS was released on June 12, 2007, by Namco.

It has board-game style gameplay similar to Mario Party and features Blossom, Bubbles, and Buttercup competing with Mojo Jojo to get to the center of the board, competing in minigames along the way.

A manga adaptation, illustrated by Shiho Komiyuno, was published in Shueisha's Ribon magazine between July 2006 and June 2007.