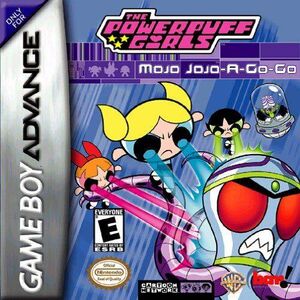 Mojo Jojo-A-Go-Go is a videogame of the Powerpuff Girls. It was released in 2001 for the Game Boy Advance, developed by Sennari Interactive and published by Entertainment BAM! Entertainment. It centers around the Girls trying to stop Mojo Jojo from stealing Chemical X after he invents a giant army of Mo-Bots.

Mojo Jojo A-Go-Go features a sinister plot of Mojo Jojo, who has flooded the city of Townsville with his mechanized minions. Stolen jewels power these “Mobots”, so it’s up to the Powerpuff Girls to shut down the robots and recover the loot. However, the girls don’t even find out until Mojo arrives at their house and steals Chemical X—the source of their powers!

Unlike the Game Boy Color games, which are centered on a specific Powerpuff Girl, this game allows the player to control all 3 Powerpuff Girls.

At the end of each level, the girls confront a boss, usually Mojo-Jojo himself in some form. A notable exception is the giant mecha octopus boss. Upon defeating the boss, an animated scene rolls and it’s off to the next stage.

Aside from the game's single-player mode, Powerpuff Girls: Mojo Jojo A-Go-Go also features a variety of multiplayer modes, which can be played using the GBA link cable.

Retrieved from "https://powerpuffgirls.fandom.com/wiki/Mojo_Jojo-A-Go-Go?oldid=184819"
Community content is available under CC-BY-SA unless otherwise noted.