HIM is an ancient demonic being who fought was defeated by the girls who resembled the modern Powerpuff Girls Z team. After being reawakened by black Z rays, he became the most powerful enemy of the Powerpuff Girls Z.

In ancient times, Him was dedicated to bring about the destruction of a small town, however, was defeated by the Goodenough Girls who took advantage of Him's weakness (cold) to lock him up and take part of their evil and save the mountains. But when Ken ended up destroying that mountain (below) Z-rays were scattered all around New Townsville, and consequently, over producing and giving birth to the many villains in the city. And a black Z lightning struck Him and woke him. It is also known that he released a strange dust that was responsible for producing some villains.

HIM lives for nothing more and nothing less, to create chaos.

HIM no longer has red skin, and more closely resembles a harlequin. He also doesn't talk in an echoing falsetto. 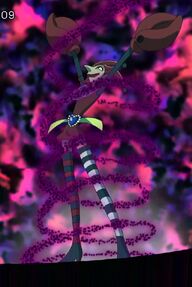 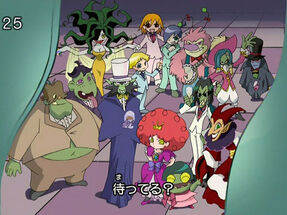 Add a photo to this gallery

Retrieved from "https://powerpuffgirls.fandom.com/wiki/HIM_(Powerpuff_Girls_Z)?oldid=206957"
Community content is available under CC-BY-SA unless otherwise noted.