watch 03:27
Wiki Targeted (Entertainment)
Do you like this video?
Play Sound

The Giant Fish Balloon Monster (vocal effects and evil laugh provided by Kevin Michael Richardson) is a villain monster that appeared in the episode "Uh Oh Dynamo" When the monster appears from under the water he tried to ruin all the people of Townsville's fun and games the girls tried to stop but he's too strong. And he goes on a rampage by destroying Townsville. But the girls used the Dynamo to stop the fish balloon by throwing three star-shaped signs from a bowling alley that pierces its mouth, causing it to deflate and flies away uncontrollably before falling to Mount Rushmore.

The Giant Fish Balloon is a giant red puffer fish with a dinosaur-like tail and an oval body, looking like an actual balloon. He has seven (or six) eyes and large fangs. He is also covered in giant spikes that go all down his back and tail. His lip resemble that of a balloon's mouth.

True to its name, the monster can expand his body and sucks air to inflate himself, which he possesses an incredibly powerful strength in fully-inflated state. He also briefly inflate bigger to cause his spikes to explode like a sharpnel and destroying anything around him.

However, due to its inflatable-like characteristics, he is somewhat vulnerable to sharp objects, especially his lip, which revealed to be his only weak point (in regards to his rather strong body when inflated). The star-shaped bowling signs that end up on his lips easily pop holes on it, which causes him to deflate and fly away off like a balloon. This may also be a reference to deflating a balloon by cutting off or puncturing the knot, without causing it to pop. 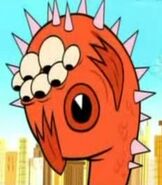 Add a photo to this gallery
Retrieved from "https://powerpuffgirls.fandom.com/wiki/Giant_Fishballoon?oldid=202779"
Community content is available under CC-BY-SA unless otherwise noted.