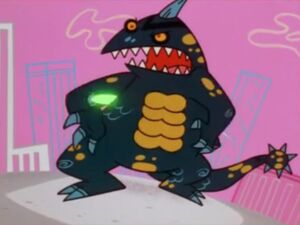 Fred the Monster (voiced by Jeff Bennett) appears in the episode "Major Competition." After being replaced by a superhero named Major Man, The Powerpuff Girls hatch an idea to summon a monster named Fred, which scares Major Man and exposes him as a fraud and coward.

The girls knock the monster out, and the crowd watching the fake battle disperses with their faith in the heroes restored. Once they leave, it is revealed Fred is actually a friendly monster and knows them. The girls apologize to Fred the Monster for roughing him up and tell him he's a good actor as he happily takes it. Fred The Monster's design is later recycled for the episode "That's Not My Baby".

Add a photo to this gallery
Retrieved from "https://powerpuffgirls.fandom.com/wiki/Fred_the_Monster?oldid=204051"
Community content is available under CC-BY-SA unless otherwise noted.