Craig Douglas McCracken is the creator and one of the animators of The Powerpuff Girls, Foster's Home for Imaginary Friends, Wander Over Yonder, and Kid Cosmic. He started working for Cartoon Network in 1992 on 2 Stupid Dogs and Dexter's Labratory, and created The Powerpuff Girls, which was previously a college short named "Whoopass Stew". While working on the series he met his future wife, Lauren Faust.

He left Cartoon Network Studios after CN started using more live action series. He later began working on his new show, Wander Over Yonder, which premiered on August 16, 2013 on Disney Channel, later moving to Disney XD in 2014. Craig later announced in March 2016 that Wander Over Yonder was cancelled after 2 seasons and it aired its last episode on June 27, 2016.[1] After leaving Disney, he created a show for Netflix called Kid Cosmic, which premiered in 2021 and ended the following year.[2]

His ten favorite episodes of The Powerpuff Girls are:

McCracken directed every episode of the series from seasons 1 to 4, before he left the show to work on his next creation Foster's Home for Imaginary Friends. His other work on the series includes: 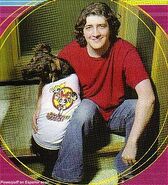 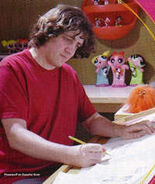 Craig's caricature, as he appeared in Criss Cross Crisis.

Craig McCracken's cameo, alongside Don Shank in the episode Slumbering with the Enemy.

Another caricature of Craig as he appeared in Foster's Home for Imaginary Friends.

Craig's cameo appearance in a show he didn't create but was heavily involved in, Dexter's Laboratory.

Craig, during his time working on Wander Over Yonder.

Craig being interviewed about the show Wander Over Yonder. 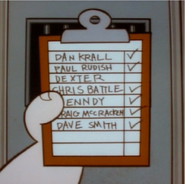