Cartoon Network: Punch Time Explosion is a fighting video game for the 3DS developed by Papaya Studio and published by Crave Entertainment. The game was released on June 2, 2011 in North America, and on April 20, 2011 in Europe. Its sequel Cartoon Network: Punch Time Explosion XL was released on the Wii, Xbox 360, and PlayStation 3 on May 18, 2012 in North America and on June 14, 2012 in Europe.

The story begins with  the Announcer, who is taking his day off and decides to watch some of the Cartoon Network shows. However, he finds that all these shows are facing utter destruction.The story then cuts to Ben Tennyson, who, seeing a newspaper article about the return of his arch-enemy Vilgax heads off to find him. Ben is then transported into Chowder's world, and, after defeating a corrupted Chowder, teams up with him to find Mung Daal. They find him with Vilgax, who escapes while the heroes  are defending Mung.

Chowder's dimension is then destroyed and they're then brought to Ben's universe, and are transported to the Null Void after freeing a corrupted Buttercup. The three find Vilgax, but are brought to Primus to fight Ultimate Kevin Levin while Vilgax escapes yet again. After the battle, Ben's world is also destroyed, but the three heroes are saved by Dexter, who's built a machine that allows them to travel to the different dimensions. They then go to Flapjack's universe to save him, but the harbor is attacked by Stickybeard and his crew.

While the others retreat, telling Flapjack they'll return, Flapjack fends off the candy pirates, then fighting Vilgax and a corrupted Numbuh One. After Vilgax escapes, Numbuh One joins with Flapjack and K'nuckles to defeat Stickybeard. After Stickybeard's defeat, the heroes are picked up by the others and brought to Numbuh One's dimension.

Numbuh One, Flapjack, and K'nuckles then defend the Kids Next Door's treehouse from the candy pirates. Meanwhile, back in Dexter's dimension, Father sneaks in and sabotages the lab, sending Ben, Chowder, and Buttercup to the City of Townsville, where Mojo Jojo is on a rampage in a giant robot. There, they find Blossom and Bubbles. The group fights their way through the bustling metropolis, but then fight amongst themselves as to who would go to face Mojo. The winner of the fight then destroys the robot's power core. Mojo then escapes, and the heroes leave as the dimension is destroyed.

The group finds themselves at Foster's Home for Imaginary Friends, where they rescue a corrupted Mac and Bloo and defend Cheese from villainous forces. After that, Mac and Bloo join up with the heroes and head out just as the dimension is destroyed. After picking up Numbuh One, Flapjack, and K'nuckles at KND treehouse, the now-one team returns to Dexter's lab, which is now heavily damaged. After the group fights their way through, they find Father, who then fights the player and Numbuh One. After Father escapes, the heroes are attacked by Aku.

After Aku is defeated, the heroes travel to Endsville and encounter the Grim Reaper. After fighting their way through, rescuing a corrupted Billy and Mandy, and battling an army of zombies, the group goes to the Underworld. There, they find and defeat Mojo Jojo and Father. They then escape the dimension as it, to, is destroyed. They then take the capsule to Samurai Jack's dimension. After defeating the corrupted warrior, Jack joins up with the heroes, but are attacked by Vilgax. After Vilgax's defeat, the now rather large group travels through Jack's world and defeats an army of Basket Robots.

As the dimension capsule prepares to make one more warp to save the universes, it suddenly explodes, leaving the heroes floating in an unrecognized dimension. The Announcer then watches, shocked, as his own remote control floats down and transforms into a giant robot, revealing it had been responsible for the destruction of the individual worlds. It then entraps the heroes in an energy ring and is about to send them through a portal to oblivion.

The Announcer then says "Well, that is a cruddy ending! I knew I shouldn't have bought a discount remote. It just doesn't make sense: our heroes had the fire, they had the heart, they had fought on earth, and they had fought on water, and with their powers combined...well, something should have happened, but it didn't." Chowder then farts, prompting the Announcer to say "Hey, who just broke wind?" The combined elements he had mentioned then combine and summon Captain Planet, who frees the heroes and the final battle between the heroes and the Remote ensues.

Once the remote is defeated, Dexter uses the parts to restore the universes and, after one last goodbye, everyone is returned to their home dimension. Everything then goes back to normal, except, as the Announcer points out, that he now doesn't have a remote and must get up and change the channel himself. As everyone returns to their homes, he wonders if he could get a lava-man to change it for him with a giant lever, the idea of which he likes the sound of. 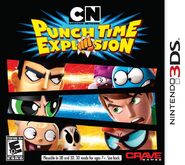 Add a photo to this gallery
Retrieved from "https://powerpuffgirls.fandom.com/wiki/Cartoon_Network:_Punch_Time_Explosion?oldid=175342"
Community content is available under CC-BY-SA unless otherwise noted.