Blue Ribbon Blues is the fifteenth episode of the 2016 Powerpuff Girls series. It aired on Cartoon Network on May 12, 2016.

Midway Elementary Science Fair is coming up and is to be judged by a famous scientist who happens to a be a favorite of Blossom. However when the two meet, he convinces Blossom to help him build a device with ill-intentions in mind.

The episode begins with Blossom, becoming near euphoric over the appearance her new teacher and judge of the upcoming science fair at Midway Elementary. The teacher appears to have trouble spelling his own name and recalling his accomplishments. The teacher quickly announces that he is presiding over the blue ribbon award "and awarding this prestigious blue ribbon to the student with the most impressive science-faire project".  Buttercup and Bubbles announce that their science project will be to investigate rumors of a 'ghost horse' at their school.

The new teacher now ‘Rupert Kensington’ then asks Blossom about her plans for the aforementioned upcoming science fair: she lists a baking soda volcano, a tornado tube, an ant farm derby, a paper mache brain, and finally, perhaps incredulously cold fusion.   After verbally discarding all of these ideas 'Dr. Rupert Kensignton' bribes Blossom into building what he claims would be an upgraded version of his transmogrification machine by offering to make her first his assistant, and then his laboratory partner.

Next we see Bubbles and Buttercup beginning to look for traces of the 'ghost horse’. Almost immediately after that the episode skips forward by a week to the science fair. We see several stalls, before arriving at Blossoms' stand we see "The History Of Hammers’’ presented by Barrey Macleburger, among others, before we arrive at the "Ghost Horse: Fact or Fiction" stall manned by Blossoms' siblings. The two of them then proceed to explain their strong suspicion of a link between the Ghost Horse and "Dr Rupert Kensington PHD’" before being brushed off by Blossom.

Blossom the unveils her new invention "The Transmutator 2.5" and demonstrates it’s function using some nearby dolls. "Kensington PHD" then reveals himself as both the janitor and a centaur, solving the B plot mystery. He is revealed by Buttercup to have been made into this in an earlier science fair accident.

Blossom points out how he could have simply asked her to build him a device to return him to his original state, but the Janitaur then ignores this epiphany and proceeds to rampage across the room, firing upon Blossom with the transmutation ray and hitting many of the students including Bubbles who is transformed into a bee while Buttercup morphs into a flamingo. Blossom then attempts to stop the Janitor using a giant hammer borrowed from Barry's stand, she misses, punching a hole in the wall and revealing the real Rupert Kensington.   Blossom is so distracted by him that she also gets hit with the transmutation ray, becoming a walrus. Her sisters then distract Wendel Feinstein (Janitaurs name) while Blossom crawls to the power station for the transmutation device and destroys it, she then reveals that she also built a machine to deactivate the results of the previous one.

Blossom then uses the device to return everyone besides the Jainitaur to their original forms.The episode draws to a close with Bubbles and Buttercup receiving the blue ribbon award for coming close to solving the mystery and set up earlier watches, they immediately begin harassing the real Dr Kensington while Blossom looks on in horror. The episode ends with a shot of the Jainitaur continuing to sweep the floor. 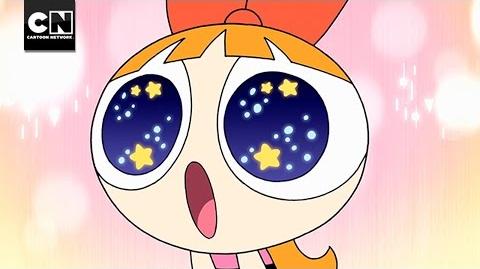 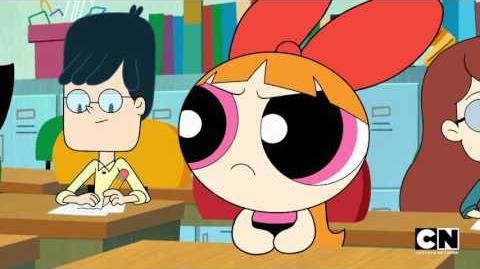 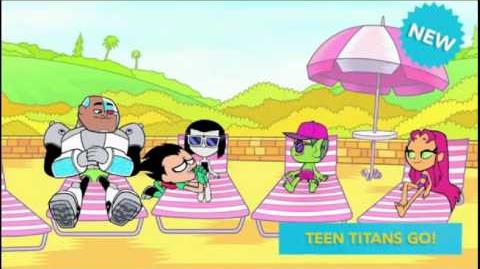 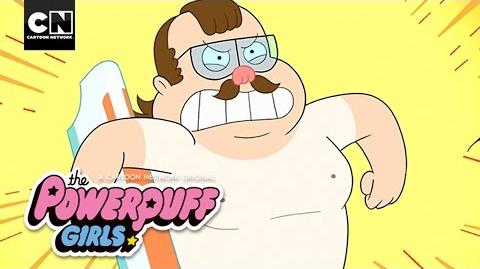 The Transmutinator 2.5 Powerpuff Girls Cartoon Network
Add a photo to this gallery
Retrieved from "https://powerpuffgirls.fandom.com/wiki/Blue_Ribbon_Blues?oldid=191959"
Community content is available under CC-BY-SA unless otherwise noted.