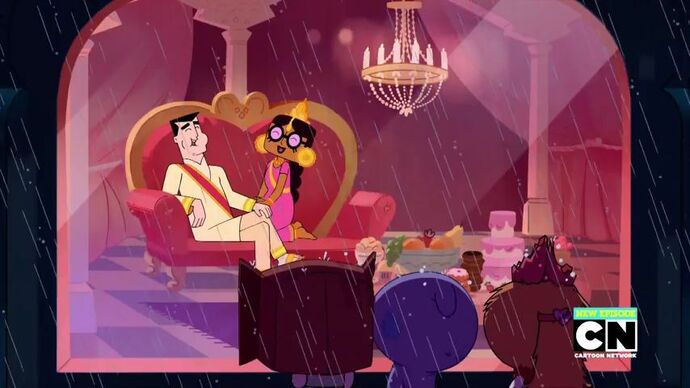 Arachno-Romance is the thirteenth episode of the 2016 Powerpuff Girls series. It aired on Cartoon Network on April 28, 2016.

The Professor has a new girlfriend, a scientist from India named Sapna, who gains the jealousy of the girls when she takes his attention away from them, prompting the three to try and split them up. Sapna has a deadly secret, however.

The girls begin to set-up snacks for movie night, for the TV movie of Space Trucker that they have been waiting for. After the Professor brings them drinks, he opens the door for his girlfriend, a scientist from India named Sapna Nehru whom he invited to movie night. She and the professor then squeeze into the couch making the girls uncomfortable. Sapna continues to bother all of the girls unintentionally, eating all of Bubbles' popcorn, not using a coaster, and spoiling the end of the movie for Buttercup. After the Professor kisses Sapna, she then mysteriously leaves.

The girls are then called to fight and defeat a giant spider, and after Buttercup knocks it back they see Sapna there as well. She then leaves to go to the "Discount bags of meat" store, but Buttercup humorously points out that that wasn't the direction of the said store. After fearing that Sapna could steal the Professor away from them, the girls then decide that Sapna needs to go, and while using the Professor's computer they send a break-up note.

The next day the Professor is in a complete depressed stupor of Sapna, to the point of playing his banjo. Little did he know that his daughters had plotted to get Sapna out of the way and keep the Professor to themselves while avoiding Sapna's suspicious deeds. Despite this, the Professor's depression makes the girls feel incredibly guilty. They promptly fly over to Sapna's lab asking her to get back with him because it was they who wrote the letter. As it turns out, she knew it was them and broke up with the Professor for a different reason. After Buttercup shows her a song about how much he loves her, she then turns into a giant spider.

While fighting Spider-Sapna, the Professor is shown in the park singing about his lost love. The girls while fighting her, also admit that they think she is a nice person and wants the professor to be happy. Sapna then reveals to Utonium that due to a lab accident, whenever she feels loved she turns into a giant spider, and because of this she can't see Professor Utonium. The Girls then go home, Professor Utonium puts away his banjo and begins to look for a cure for her, so they can be together again, then the episode ends.