View source
watch 01:39
Hawkeye Is Here To Amaze - The Loop
Do you like this video?
Play Sound

Alpha and Beta are a team of androids that appear in the Powerpuff Girls Z Manga. They appear as the primary antagonists in both volumes although they give up terrorizing Tokyo by the end of the second volume feeling deep regret for their previous actions.

Alpha and Beta both look fairly similar to each other, appearing like young teenage humans with Black hair and primarily black outfits. Both wear long one piece's that hang down to about their knees both, tall black boots and grey gloves. Additionally Alpha wears a long white scarf and pants.

In their corrupted forms they are depicted with catlike pupils and triangular markings across their cheeks.

As revealed during flashbacks Alpha and Beta began life as fairly optimistic loving children although the two always had a bit of a selfish streak desiring to be hero's like the Powerpuff Girls Z in so that more in order to gain attention and adoration. After being hit by black Z rays the two of them lose a large chunk of their their memories no longer recalling their caring parental figures and only vaguley remembering the selfish scientists around during their creation who thought of them as nothing more than tools.

As a result of this in most of the manga they display anything from apathy to hatred towards humans with many of their actions seemingly being taken to cause emotional suffering among the city folk as "revenge" for the way they perceived themselves as having been wronged.

Beta appears extremely protective of alpha pulling the both of them out of fights a few times after seeing alpha in distress as well as becoming exceedingly aggressive when seeing their twin threatened. Alpha appears to to be more emotionally vulnerable than beta and also a bit more inquisitive.

Both are shown to usually be more interested in amusing themselves than advancing their goals at anything like a quick pace.

Both androids possessed the following abilities;

Alpha and Beta first enter the story in chapter 7 of volume 1 of the manga in which they interrupt a field-trip to undertaken by the PPGZ and their classmates. They command a wave a robots to attack all the humans including the Powerpuff Girls Z. They fled shortly thereafter.

They next appear in chapter 8 contained in volume 2, first by hacking into signals all across the city and broadcasting a message mocking just about everyone they could via such tactics. After interrupting Blossoms/Momoko's watching of some superhero show she takes it personally and the girls race out to face the androids. Upon their first attempt girls fail miserably in their attempts to subdue Alpha and Beta due to their use of a machine producing waves that paralysed the Powerpuff Girls Z during which the androids attacked wit.

The girls are forced to retreat until blossom hits upon the idea of using some nearby headphones such that the ultrasonic wavess were no longer a probelm, the girls destroy A&B's machine and the two of them immediately retreat. From chapter 10 forwards they remain recurring though the rest of the manga.

The duo's next act of mischief was to send love letters to everyone within the school the Powerpuff's attend. Upon catching the two of them in the act the girls once again confront the androids with events proceeding much like earlier. That is until buttercup and blossom confront the two on an emotional level by asking about their creators. This angers Beta who begins firing her beams wildly and gives Alpha a panic attack. When alpha gets hit with one of buttercups hammer attack the twins retreat once more. In the following chapter the girls discover more about their backgrounds, Proffessor Utonium having found a photgraph depicting alpha and beta with their creators. The two do not physically reappear until the start of a soccer match the girls and the Mayor are attending. Using a new machine they quickly kidnapped the mayor in an attempt to gain control of the city.

The Powerpuff Girls Z once again engage in combat with Alpha and Beta, and they appear to be evenly matched until blossom drops the photograph. Upon seeing this Alpha is shocked and we are treated to a flashback sequence in which the foremost android clearly recalls their past. Beta only aware that Alpha is standing there with a gormless expression and reacts by fires haphazardly at the girls again. Buttercup blocks the shot with her hammer. Next Beta then rushes over to Alpha and they both begin cryingafter having seen the photograph.

For unexplained reasons the twins lose their superpower immediatley after this and thus theyare unable to prevent one of the goalposts from falling onto them. Luckily, they are rescued by the girls and and after profuse appolgies are reuinted with their parents.Their story ends with both of them telling the powerpuff girls Z, via a letter about how they've come to enjoy their new lives with their parents as well as their hopes for the future. 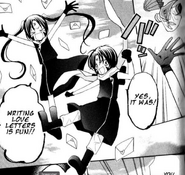 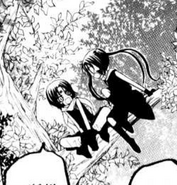 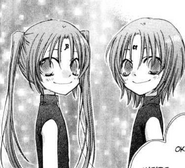