A Star Is Blossom

A Star Is Blossom is the seventh episode (and the forty-sixth episode overall) of Season 2 of the 2016 Powerpuff Girls series. It aired on Cartoon Network on May 7, 2017.

Blossom thinks she's a shoo-in for the lead role in a school play. When the list comes out, it's Bubbles who wins the lead role. Blossom, resigned to playing a rock (with no dialogue at that), tries to sabotage Bubbles' appearance until a Viking queen shows up after being summoned from a book (from which the play's script comes) and takes the male lead, Jared Shapiro, to get him to marry her.

The episode opens with a crowd of students anxiously awaiting the cast list to be revealed for the upcoming drama club production, “Erica The Red.” Ginnafrey comments that she wishes that the cast list were up already, and a random girl sees no point in it due to Blossom always scoring the lead roles. A boy in the same room comments on her acting skills in agreement. The same girl turns to see Blossom entering the hallway, where Blossom greets the group while the same group gushes about her acting talents. Bubbles later enters the room, happy that Blossom encouraged her to try a new activity. She comments on how acting is like playing pretend while an audience watches and silently judges you. Blossom then enters into a romantic fantasy sequence when she finds out that Jared Shapiro also auditioned as well. Jared enters the room and looks at the cast list happily, and leaves to practice his singing voice for the show.

Bubbles is wondering what role she got to which Blossom says that regardless of the role she landed, all that matters is that she tried. Blossom turns to see that Bubbles is overly happy as she unexpectedly got the female lead in the show. When Bubbles asks Blossom what role she got, the scene fast forwards to a grumpy Blossom stuck in the ensemble as rock number 3. 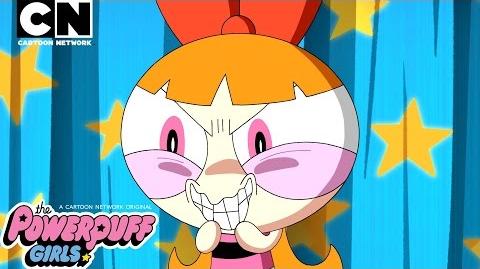