Start a Wiki
watch 01:24
The Loop (TV)
Do you like this video?
69 Yodelinda Valley Lane is the home address of Miss Sara Bellum. It is a fancy, illustrious house, wherein Miss Bellum lives. It first appeared in the episode "Something's a Ms.".

69 Yodelinda Valley Lane made it's first and major appearance in "Something's a Ms.", as it's where Sedusa kidnaps Ms. Bellum and holds her for ransom. It's also where the two women have their fight, featuring a few locations of the house, including Ms. Bellum's swimming pool.

In "Criss Cross Crisis", the exterior of the house was seen when Professor Utonium's body swapping machine malfunctioned and its radio signal was sent everywhere in Townsville, including 69 Yodelinda Valley Lane. Logically, this meant that Miss Bellum would be switching bodies, which she did, with Blossom.

In "Reeking Havoc", Miss Bellum was seen in her house, late at night. The chili she had eaten earlier was not agreeing with her, and her stomach started gurgling, while she was in the kitchen. Miss Bellum took out a wedge of cheese and sliced it, as she exhaled a sigh of relief. This served as a visual pun on the fact that she was "cutting the cheese", or simply put, farting.

In "Aspirations", Sedusa had an expository flashback, explaining why she had lost all her hair. The flashback showed a clip from the episode, "Something's a Ms.", which took place at 69 Yodelinda Valley Lane. This was the scene where Miss Bellum cut all of Sedusa's hair off, due to her being wet and powerless. 69 Yodelinda Valley Lane did not make an actual appearance, as it was only shown via stock footage in this flashback.

The exterior of the house itself seems to be styled after the architectural style of Frank Lloyd Wright, appearing sharp and angular in appearance with lots of windows. The interior has brick walls and a dark red/maroon shag carpet.

The room featured the most is the living room, where the Powerpuff Girls confront Sedusa and where Ms. Bellum's and Sedusa's fight begins in "Something's a Ms.". The living room contains many of Ms. Bellum's furniture, including a large, light green couch, two light green chairs, a shelf carrying various pictures and knickknacks and a small glass table. Other features include a fireplace and a spiral staircase leading to the 2nd floor of the house (which is never seen).

Other rooms seen include the kitchen and bathroom, seen through Buttercup's X-Ray vision.

Sedusa in the living room.

Sedusa in front of the fireplace.

Sedusa (left) and Ms. Bellum (right) standing in front of the fireplace. 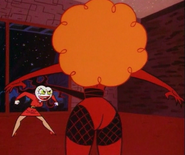 Ms. Bellum grabbed by Sedusa in the living room.

Ms. Bellum and the Powerpuff Girls in the living room.

Ms. Bellum fighting Sedusa in the living room, with the pool seen in the back.

Ms. Bellum on the spiral staircase.

Ms. Bellum resting on the staircase.

Ms. Bellum thrown against a window

Ms. Bellum up against the window.

Ms. Bellum sliding down window as the Powerpuff Girls watch her.

Ms. Bellum and Sedusa in the pool.

Ms. Bellum in front of swimming pool and broken window.

Bubbles in front of the fireplace.

Shot of the swimming pool with the city in the background.

Ms. Bellum "cutting cheese" in the kitchen.
Add a photo to this gallery
Retrieved from "https://powerpuffgirls.fandom.com/wiki/69_Yodelinda_Valley_Lane?oldid=185591"
Community content is available under CC-BY-SA unless otherwise noted.